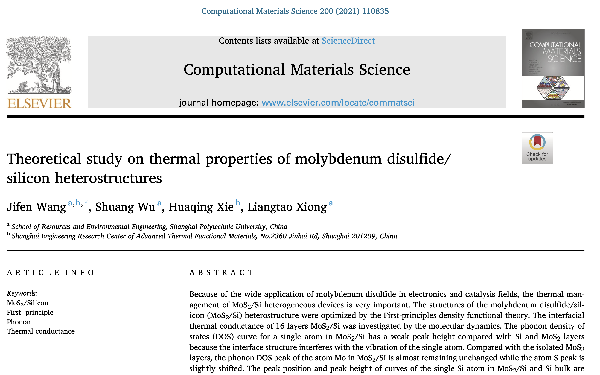 Because of the wide application of molybdenum disulfide in electronics and catalysis fields, the thermal man- agement of MoS 2 /Si heterogeneous devices is very important. The structures of the molybdenum disulfide/sil- icon (MoS 2 /Si) heterostructure were optimized by the First-principles density functional theory. The interfacial thermal conductance of 16 layers MoS 2 /Si was investigated by the molecular dynamics. The phonon density of states (DOS) curve for a single atom in MoS 2 /Si has a weak peak height compared with Si and MoS 2 layers because the interface structure interferes with the vibration of the single atom. Compared with the isolated MoS 2 layers, the phonon DOS peak of the atom Mo in MoS 2 /Si is almost remaining unchanged while the atom S peak is slightly shifted. The peak position and peak height of curves of the single Si atom in MoS 2 /Si and Si bulk are different in the same direction. The thermodynamic properties of MoS 2 /Si are calculated based on the phonon properties. We analyzed how the heat capacity (C v ), the total energy (E T ), Helmholtz free energy (A T ), and entropy (S T ) of MoS 2 /Si change with temperature and compared them with those of Si bulk and MoS 2 layers. The results show that each thermodynamic faction curve of MoS 2 /Si has a similar trend with temperature as that of Si and MoS 2 layers. The obtained thermal conductance (G) between 16 layers MoS 2 and Si bulk is 17.05 MWm −2 K −1 at 300 K based on the molecular dynamics. The G of interface increases with interactions between Si and MoS 2 layers, and temperature. This study will play an important role in the application of MoS 2 in thermal management of electronic devices. 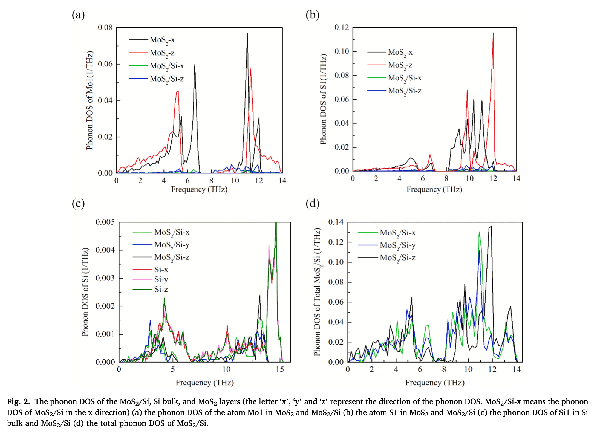 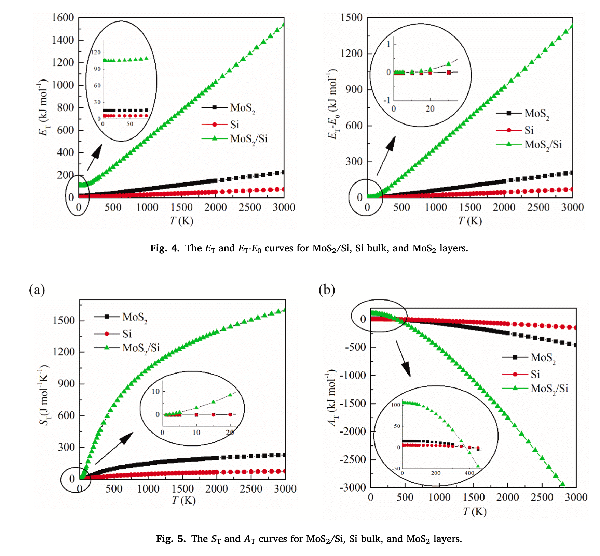